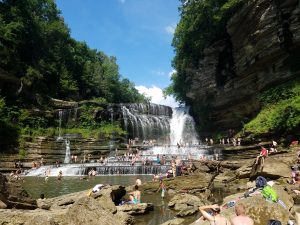 Father’s Day weekend. The weekend that everyone wants to go out with their families and have a good time. This is the weekend that my husband and I decided to go to Cummin’s Falls and hike the beautiful trail. The falls were breathtaking but there’s so much more to it. This hike was absolutely perfect.
Saturday morning my family got up, slightly a little later than planned but still excited about the “surprise” hike my daughter Bella wanted to do for her daddy. After breakfast we loaded up and headed on our 2 hour trip to Cummins Falls. It’s one of the most beautiful hikes in Tennessee and my husband has been dying to see it since we moved back to Clarksville back in May.
​

​My daughter Bella was so excited and kept whispering to me about the hike and picnic that we are doing for daddy for “Daddy’s Day,” as she calls it. She had gone out with me the night before to buy some breads for some sandwiches along with drinks and snacks for the trip. Just the glow in her eyes and overly excited giggly voice was more than enough for me to enjoy this day as much as her daddy was.​As we drove through the mountains I can see my daughter getting more and more excited. Her excitement was just priceless. Once we arrived to the falls Bella looks at her daddy and says, “Surprise!! We are going to a picnic at the waterfalls.” So cute. We parked and got ready to go. I loaded Isa up on my Ergo while Rob (daddy) took the “picnic ready” backpack and held Bella’s hand. 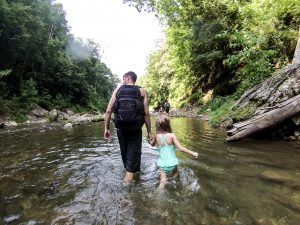 The hike to the waterfall​

As we started our hike we were immediately stopped as they were checking everyone’s belongings for contraband. There’s no alcohol, floatable devices, drugs, etc allowed on the hike as this park is one of Tennessee’s state parks. You can go here to get all the information needed before doing this hike HERE.​The hike then followed downhill. One of the park’s rangers told me that to get to the falls take 2 rights and then a left at the river. Super easy. It was downhill all the way to the river and then upstream until you got to the falls. Literally upstream. We were in the river on slippery rocks with water half way up to our knees and sometimes even up to our knees almost the entire way up to the falls. It was so worth it though and this part was fairly easy for me. Not so much for my daughter as she is a petite little thing struggling with the water and slippery rocks. Kids are not recommended to come on the hike according to their website but are permitted and the majority of the families there had kids, even infants that were only a few months of age. I probably wouldn’t recommend an infant but maybe an older toddler or if you can baby carry your toddler like I did with Isa that would work great too cause your hands are still free to catch yourself on a fall. 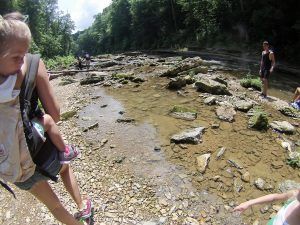 On our way upstream we were saw tons of beautiful views. We spent maybe a good mile going upstream. We were lucky to see a small little waterfall. This fall looked like something out of a magical fairytale for little fairies. It was so beautiful. Not sure what the name of it is (or if it even has a name) but it was magical. A little waterfall amongst the rocks surrounded by trees.
​We continued on our way up to the falls till we reached it about 1.5 hours into our hike. It was so beautiful but my mommy instincts kicked in very quickly as I saw the rushing water and I just wanted to hold on to my little ones and make sure they didn’t get taken away into the rocks. By this point there’s so much water heading out that the water along with the slippery rocks weren’t a good idea for Bella (5 years old). My husband held her on his back at this point as I continued to hold Isa on my Ergo. Once we got closer to the falls we decided to find a rock to picnic at. Well more like a ginormous boulder.
​

We sat, ate, and hydrated to then head closer to the falls for a swim. I was nervous at first just cause of my little ones but once we got in I wasn’t nervous at all. You can’t feel any currents though it was still very slippery. The water was pretty cold. Maybe around 60-65 degrees and the falls were like falls on top of falls. The very bottom of the falls went over a rock so you can actually get underneath the rock and see the falls from the inside out. It was pretty cool and I think Bella’s favorite little spot. And my husband’s too as he was talking about getting in there since he saw one person do it when we arrived at the gorge (falls). We all went in for a picture. Note to self. Don’t take pictures inside a cave looking out cause you’re going to look like a black shadow instead.
​ 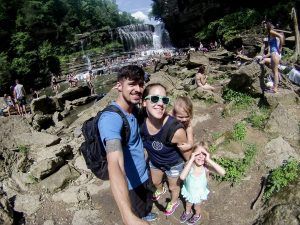 After almost 2 hours of being at the gorge we decided to head back to beat the crowd. Yes we had a huge crowd at the falls but mainly cause it’s Father’s Day weekend and a Saturday. I have heard that weekdays in the early mornings are best so you can have the falls mostly all to yourself. Another note to self.

Heading Back From The Waterfall

​As we headed back, going downstream was easy and fairly quick, maybe about an hour, but the hardest part of the entire hike was going up that hill and climbing those waist high stairs. Yes I am short and those stairs kicked my butt. At one point I felt like I was climbing them. My daughter just waited for Rob to pick her up and put her on the next step cause poor thing couldn’t even get her leg up there. Definitely easier going down the hill then up the hill. By the time we got back to the top of the mountain to the parking lot we were worn out. We then headed home to get some well needed food, hydration, and rest. I will definitely be coming back but without the kiddos and in the early morning on a weekday so we can enjoy it to it’s fullest.
​ 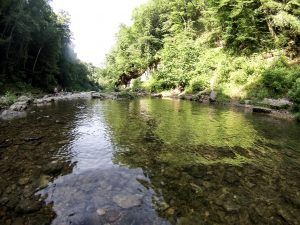 Details About The Hike

Distance: approximately 1.5 miles to the gorge and another 1.5 miles back.
​Apparel/Gear: Closed shoes such a hiking boots, sneakers, etc…, no flip flops, comfortable clothes to hike in, head gear, sunblock, swimsuit for swimming at the gorge, life jackets for little ones, sunglasses, camera (phones won’t have much to no reception), hydration, snacks, and food.
​Level: Moderate
​Kids: I will leave this one up to you. Bella has been hiking since she was about 2 years old and I know her limits. I don’t recommend taking infants.
​Pets: Pets are allowed but must be well behaved and on leash at all times. Please pic up after your pets.
​Camping: No campsites available but there are nearby campgrounds. There’s one actually across the street from the park but they are not affiliated with the state park.​For any information about the park as well as rules and regulations go here. 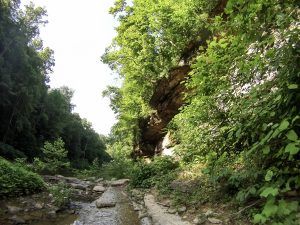 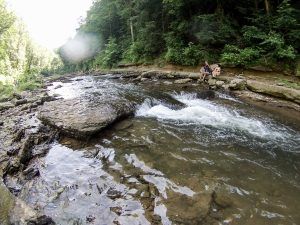 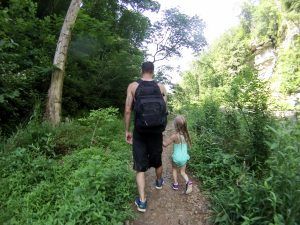 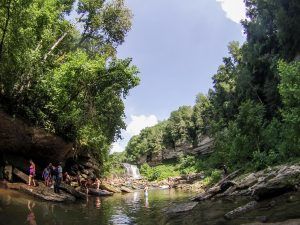 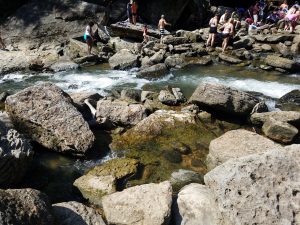 Disclaimer:  This post was in no way compensated. All opinions and experiences are my own. Please hike responsibly and clean up after yourselves. The falls is part of  one of Tennessee’s state parks so follow all rules and regulations as follows. All guidelines of the park are listed on their website. Sand Cloud and Nectar apparel is worn during the hike for promotional purposes. There are affiliate links with Target, Ergo Baby, and Amazon.com found on this post. 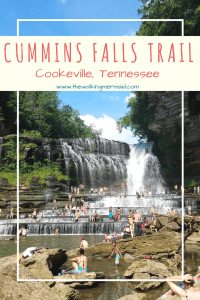 I am a wife and mother to three amazing kids. A coffee addict and wine lover. I also have a huge love for the mountains and the the ocean. Through my blog I hope to inspire families to spend more time outdoors.

And get travel guides, travel tips, family lifestyle hacks and more, sent directly to your inbox! Plus get FREE access to our Resource Library where you can get tons of downloadable resources at your fingertips! Sign up now and also receive our FREE Camping Trip Planner as a gift from us to you!

Don't see it? Check your spam inbox and make sure to add us to your contacts.

We don't like being stuck in spam and we have a lot of cool things to offer that you won't want to miss! ;)

New on the Blog

Articles You will also love!

If you are looking for the perfect sunrise hike then Lanikai Pillbox hike is the place to go. This stunning hiking trail is filled with stunning views of Lanikai and Kailua including the picturesque Mokulua Islands. The small town of Lanikai in Oahu, Hawaii is probably by far one of

Treasure Island is filled with many things to do. It is a perfect couples getaway that is located close to the Tampa Bay and St. Pete area in Central Florida. This little beach vacation destination is such a relaxing spot to unwind, be romantic, and enjoy some local food and

Autumn is such a perfect time to go on a trip to Shawnee National Forest. This beautiful national forest in Illinois is perfect for camping and hiking offering some very stunning views and gorgeous hiking trails. In this travel guide I will be going over the best things to do

On a beautiful day such as today, where the sky is bright and sunny, full of life and not too hot, I would grab my girls and go on a beautiful hike. Now hiking with little ones is not easy so sometimes choosing a hike that is good for the

This site uses Akismet to reduce spam. Learn how your comment data is processed.

To ensure that you get the best experience on our website. To learn more visit our terms and policies.